This new study used statistics from investor visa programs, property registers, and statistics in sales from various countries, as well as having interviews with 800 individuals who have a net worth or assets of $1 million or more. The report shows that the number of millionaires who are migrating is up about 18,000 from the previous year.

Also, for the second year in a row, Australia has been the top country for these millionaires rather than traditional countries such as the United Kingdom and the United States. Australia Immigration Professionals reports that they have had an influx of people interested in migrating to Australia from all over the world.

In 2016, the top five destinations for millionaires were: 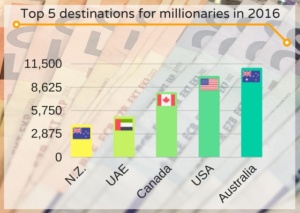 Australia Immigration Professionals can answer your questions about why Australia is a top location.

There are many reasons that Australia has become popular among millionaires including: